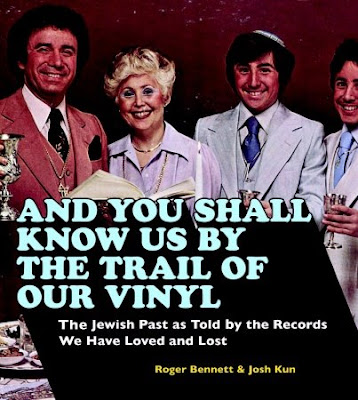 After posting earlier this afternoon, I continued looking for more information on Irving Fields and came across an article and other links to this book -- And You Shall Know Us by the Trail of our Vinyl -- which is scheduled to be released in a mere two days!

The cover photo looks like every Bar Mitzvah ever held during the 1970s. Dig the gangsta Star of David, three-piece polyester threads and Jewfro on dad! The Shirley Jones/Mother Partridge-inspired coif on mom! And the sons -- what catches! It's almost a given that a few years later, at least one of the two -- much to the delight and kvelling of his parents -- surely added initials to his name, most likely "MD," "CPA" or the lowercase and always subtle "esq."

The book features album cover art collected by the authors, Roger Bennett and Josh Kun, which they bravely hunted down at garage and estate sales in the wilderness of Boca.

I can't wait to read it.
_________________________
Update: It seems that Bennett and Kun were among the masterminds responsible for the re-release of Irving Fields' Bagels and Bongos and it, along with other recordings, can be found at their website, Reboot Stereophonic. More information about, and a whole lot of cover art from, some of the albums featured in their book can be found at Hippocampus Music.
Posted by Cheryl at 2:34 PM
Labels: album covers, and you shall know us by the trail of our vinyl, Boca, Jewish music, Josh Kun, Roger Bennett